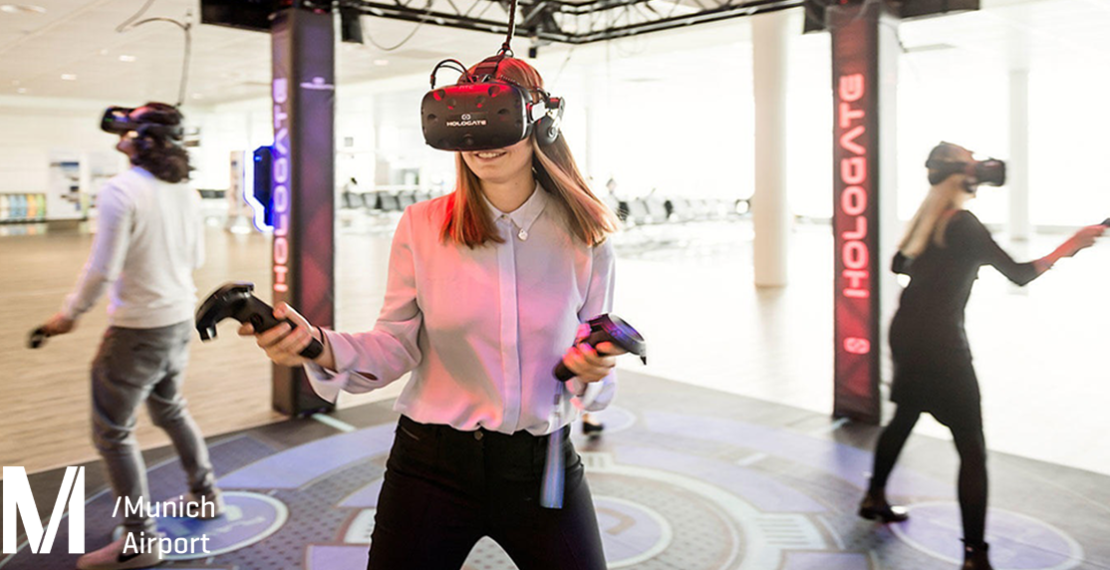 In 2018 Munich Airport counted over 46 million air travelers, confirming its place among Germany’s leading aviation hubs. But the airport doesn’t only excel in terms of passenger volumes: In the 2017 World Airports Awards hosted by the London-based Skytrax consultancy, Munich Airport’s Terminal 2 was voted the world’s best such facility. Travelers were impressed by its recreation areas and especially by the wide range of activities available for pleasantly passing the time. For example, passengers can take advantage of diverse shopping opportunities or relax in comfortable cafés and restaurants in the satellite terminal―or even go on spectacular virtual voyages without leaving the building.

The virtual reality arcade created especially for this purpose was Munich Airport’s response to the growing popularity of virtual reality (VR) experiences. A survey carried out by Statista revealed that more than 50% of respondents would like to immerse themselves in another world, 28% are interested in trying out something completely new, and 24% want to experience the intensity of VR-enhanced games. All of this is now possible in the Terminal 2 satellite. Simply put on a VR headset with integrated headphones, and you’re good to go. The many possibilities include battling robots, zombies or dragons, engaging in a virtual snowball fight with penguins, or testing your dancing skills. Up to four players can enjoy a virtual experience in a dedicated 25-square-meter area opposite Gate K 13.

To maximize guests’ playing enjoyment from start to finish, the company that operates Terminal 2 now offers them easy ways to pay, powered by Wirecard. For example, they can quickly and easily pay for a virtual excursion while eliminating unnecessary waits.

Wirecard makes the ePOS App available to the Terminal 2 company in combination with a Spire terminal. In addition to classic payment methods, this digital platform for smartphones and tablets also enables alternative modes that customers can define themselves. Among other things, credit card payments (and especially the contactless kind) can be made quickly, easily, and cost-effectively at Munich Airport. The app is straightforward to integrate in iOS and Android devices, and includes statistics on purchases made as well as a digital receipt management function. Since the number of people using mobile payment solutions is rising steadily, according to a Statista survey, passengers can naturally also continue to pay with their smartphone via Apple Pay or Google Pay. “The digital payment services from Wirecard make it much easier for passengers to have fun in our unique, innovative entertainment center,” says Michael Altenbuchner, who is responsible for innovation and digitalization in Terminal 2 of Munich Airport.

The digital payment services from Wirecard make it much easier for passengers to have fun in our unique, innovative entertainment center.

Michael Altenbuchner, responsible for innovation and digitalization in Terminal 2 of Munich Airport

Having already successfully integrated Alipay and WeChat Pay over the last few years, Wirecard is now helping Munich Airport digitalize to an even greater extent with the ePOS App. “Innovation is our competence, and we’re pleased to be part of Munich Airport’s digitalization journey,” adds Christian Reindl, Executive Vice President Retail & Consumer Goods at Wirecard. Due to the integrated payment options, cashless payments can now be effortlessly and above all cost-effectively accepted without sacrificing anything in the way of security. Moreover, the available reporting and analysis functions of the ePOS App make it possible to meet customers’ wishes even better.

The passengers are also grateful for this addition. The general acceptance rate in Terminal 2 has increased steadily since this collaboration began. Thanks to the ability to pay more easily and especially faster, many more travelers can now enjoy their waits at Munich Airport even more by going on virtual excursions.

Mobile technology has the potential to disrupt traditional behaviors and commerc

Payment Base Point of sale (POS)

Ensure simple and secure travel expenses for your customers and employees.