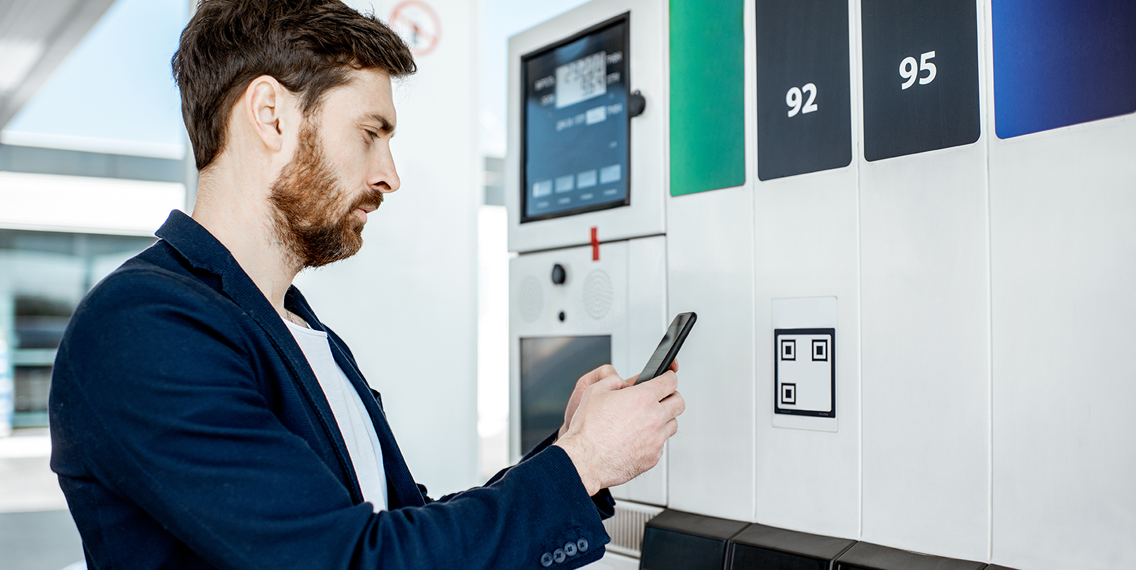 Standing in a line is often tiresome no matter the circumstances; groceries, shopping, at the post office, for example. But at a gas station, where customers are usually in a hurry, waiting to pay is not only a nuisance but could lead to excessive traffic.

The ‘pay at the pump’ system was created as a solution to queues at gas stations. For this payment concept, the payment technology is provided by the fuel company, while the gas station provides the processing account, and the processing company provides the terminal. At present, consumers can pay for gas with either a card or e-wallet. What’s more, consumers can also pay for additional goods, such as drinks or food, at the same time.

The first pay-at-the-pump terminal was introduced in Europe in 1982, however, it experienced the first deployment in 1986 by renowned US-based oil company Mobil. Following progress in this field, in 1994, 30% of convenience stores had pay-at-the-pump capabilities, and in 2002, the rate had increased to 80%. Globally, 61% of people now prefer to pay at the pump, with US-based consumers having a high overall customer preference of 77%.

As convenient as it may be for the consumer, gas station operatives must be aware that these terminals are just as attractive to crime as an ATM. Data theft and card cloning are two main security concerns, although, according to Visa, fraud rates at gas pumps are relatively low, representing just 1.3% of total US payment fraud. CompareCards however revealed in a 2018 study that 15% of US-based consumers said they had been a victim of card skimming at the pump. As a consequence, many of the consumers interviewed now prefer to pay inside. Despite this, the payment option is not any less secure than a card-not-present transaction. This is especially relevant now as gas stations owned by companies such as Shell, Exxon, or Esso allow for mobile payments that bypass the card reader altogether.

An unprecedented competition has emerged in the retail fuel market over the past several years. As a result, more and more fuel companies have upgraded their services with pay at the pump and also paired this with loyalty programmes. ExxonMobil, the US-based oil and gas corporation, introduced the Exxon Mobil Rewards+ app to provide faster payments and loyalty points. The service integrates IBM Watson Campaign Automation technologies which enable ExxonMobil to offer customized promotions based on data such as the location of the customer.

In Europe, supermajor Shell has also invested in development of a payment and loyalty rewards programme. Customers using the scheme save money each time they fill up. Shell customers can add their credit or debit card directly to the app or link to a checking account.

A third example is Esso. Esso’s app can be used with PayPal or Apple Pay from the comfort of a customer’s car. The clients are able to link a Nectar card to the app and collect points when paying at participating Esso service stations.

Fuel is a valuable resource for daily life in our modern world that is so greatly shaped by innovation and customer demand. The future of payments in the retail oil and gas sector is on its way to becoming cashless. Companies looking to keep up with this trend and stay ahead of competition will need to focus more on both improving payment systems and boosting customer engagement. Secure and reliable pay-at-the-pump technology linked to tailored awards will make way for customer loyalty and convenience.

It appears that Shell has different names for the programmes and app names based on country. For this reason, better to go with something not specifically named.

Case Studies Brand advocacy on the road with Isuzu

How Wirecard enables merchants such as Bijlipay to accept cashless payments.

Find out how ASB Bank managed to respond faster to market conditions.

How Orange has become a pioneer of mobile payment solutions with Wirecard.