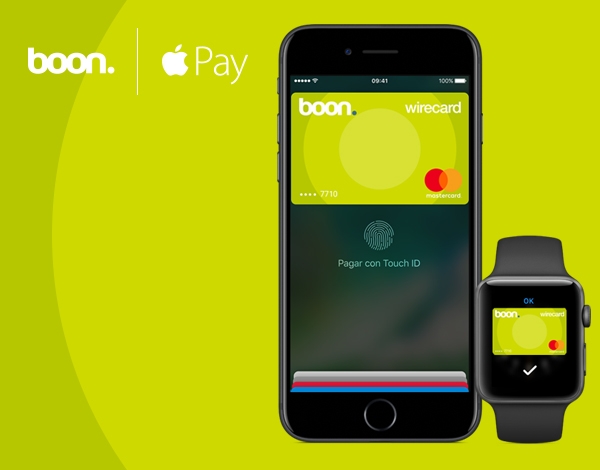 Wirecard, one of the leading and independent payment service providers, has today launched boon with Apple Pay in Spain, thus furthering its expansion in Europe. After launching in the Spanish market, customers can now benefit from boon by Wirecard with Apple Pay in six European countries, including United Kingdom, France, Switzerland, Ireland and Italy. Apple Pay, an easy, secure and private way to pay that’s fast and convenient, is transforming mobile payment.

Boon is based on an automatic app-to-wallet integration via a prepaid account with a digital Mastercard, issued by Wirecard Card Solutions. This allows users to top-up their account via wire transfer, debit or credit card. Boon with Apple Pay works at any NFC-enabled terminal everywhere the Mastercard Contactless logo appears. The app has an intuitive user interface and fresh design that represents the modern, individual lifestyle.

Security and privacy is at the core of Apple Pay. When you use a credit or debit card with Apple Pay, the actual card numbers are not stored on the device, nor on Apple servers. Instead, a unique Device Account Number is assigned, encrypted and securely stored in the Secure Element on your device. Each transaction is authorized with a one-time unique dynamic security code.

“With boon and Apple Pay you can leave your cash behind but also make contactless payments in a safe and secure manner. We are very happy to offer users throughout Europe this new and state-of-the-art way to make payments without being a customer of a specific bank,” said Georg von Waldenfels, Executive Vice President Consumer Solutions at Wirecard.

Apple Pay is easy to set up and users will continue to receive all of the rewards and beneﬁts offered by credit and debit cards. In stores, Apple Pay works with iPhone SE, iPhone 6 and later, and Apple Watch.

Find out more about boon with Apple Pay in Spain: https://boonpayment.com/es/ios/