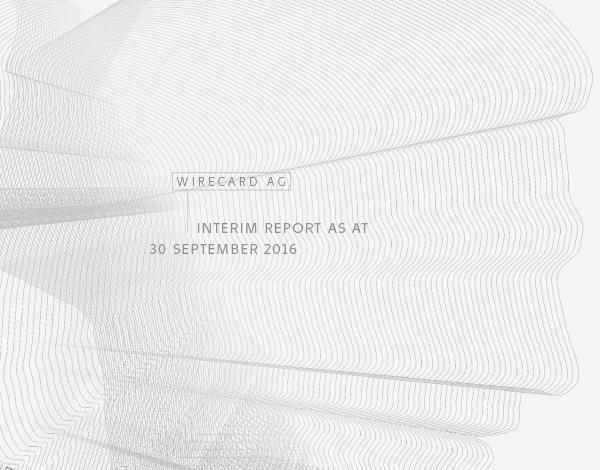 In the third quarter of 2016 and also the first nine months of 2016, Wirecard AG experienced further dynamic corporate growth.

The transaction volumes processed in the first nine months of 2016 amounted to EUR 43.6 billion and increased in comparison to the same period of the previous year by 36.3 percent (9M 2015: EUR 32.0 billion). The share of the transaction volumes generated outside Europe increased in the same period by 69 percent to EUR 13.5 billion (9M 2015: EUR 7.9 billion).

“As a global service provider, Wirecard benefits from both the constant growth of the European e-commerce market and also from the dynamic development of growth markets worldwide”, commented Wirecard CEO Markus Braun.

Wirecard is driving forward the development of electronic payment with its innovations in all areas of payment processing, credit and debit card issuing and mobile wallets, such as boon, on a global level.

The Management Board expects a strong business performance in the fourth quarter and confirms its EBITDA forecast for the 2016 financial year in the range of EUR 298 million to EUR 312 million.

For the 2017 financial year, management guided an EBITDA in a bandwidth of between EUR 382 million to EUR 400 million.

The Q3/9M 2016 Report is available for download with immediate effect.