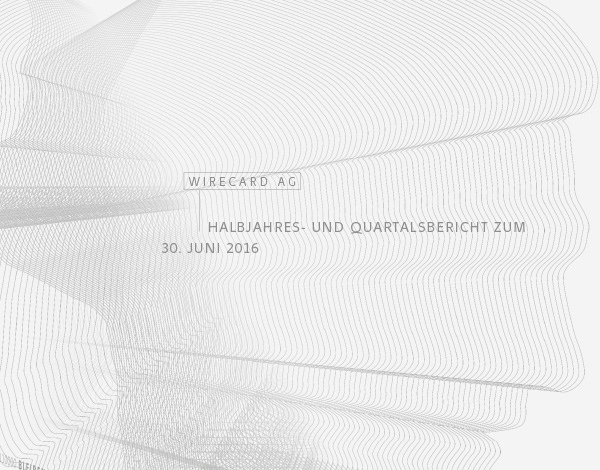 In the first half of 2016, earnings after tax increased by 173.7 percent to EUR 166.8 million. Adjusted for the income from the sale of shares in Visa Europe of EUR 89.8 million, earnings after tax stood at EUR 77.0 million. Accordingly, earnings per share increased in the first half of 2016 by 175.5 percent from EUR 0.49 to EUR 1.35. Adjusted for the specific effect from the sale of Visa Europe, earnings per share stood at EUR 0.62.

Transaction volumes processed through the Wirecard platform grew in the first six months by 35.3 percent from EUR 20.2 billion in the previous year to EUR 27.4 billion. The proportion of the overall transaction volume generated outside Europe was 30.3 percent at EUR 8.3 billion (H1/2015: EUR 4.9 billion).

Wirecard benefits from the strong growth being experienced by its core business of payment processing and credit card acceptance, as well as from the successful development of the areas of issuing, mobile payment and mobile point of sale (mPOS). The acquisition of numerous new customers and the expansion of existing customer relationships demonstrate Wirecard's business success in all sales channels. Wirecard CEO Markus Braun commented: “Alongside the constant shift from bricks and mortar transactions to online transactions and from cash payments to electronic transactions, Internet technologies are driving the convergence of all sales channels.”

In the second half of the year, the Management Board continues to expect an exceptionally good business performance and reaffirms its forecast of operating earnings before interest, tax, depreciation and amortisation (EBITDA) of between EUR 290 million and EUR 310 million for the 2016 fiscal year.